Quick Takes: Diegetic Music, Mythmaking, and the Heroic Theme in Guardians of the Galaxy

Before their cinematic debut in the summer of 2014, the Guardians of the Galaxy were one of Marvel's lesser-known properties. While various teams of superheroes have operated under the title since the late 1960s, the particular fivesome featured in director James Gunn's Guardians of the Galaxy Vol. 1 (2014) and Vol. 2 (2017) came together only in 2007. The ragtag band of erstwhile heroes were, behind the scenes, actually a ragtag band of secondary characters drawn from a variety of comic book titles. Peter Quill, aka “Star-Lord” (Chris Pratt), for example, made his debut in the anthology series Marvel Preview in 1976, and was quickly forgotten, while the lovable Groot (Vin Diesel) appeared originally as a villain in Tales to Astonish, Issue 13 (1960)--predating even Marvel stalwarts like Spider-Man (1962) and Iron Man (1963). 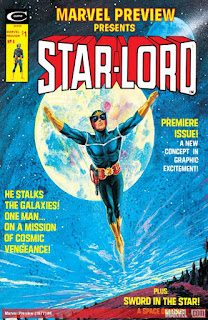 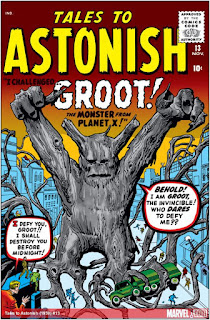 The films, particularly Vol. 1, thus have a great deal of work to do in order to establish these unfamiliar characters within a cinematic universe already populated with Captain America, Thor, The Incredible Hulk, and other recognizable figures. And while their alternating layers of sarcasm and sincerity place them among Marvel’s other recent experiments with tone and form--such as the lighthearted Ant Man (2015) and gritty, noir-influenced Netflix shows like Jessica Jones and Luke Cage--the Guardians films still strive to cast their heroism on a scale as grand as The Avengers. One of the chief strategies employed by the creative team to accomplish these two goals gives the Guardians franchise its most recognizable sonic fingerprint: a signature blend of orchestral underscoring (composed for both films by Tyler Bates) with a compilation soundtrack of upbeat 70s popular music, which has served to identify the franchise in trailers and marketing materials.

Throughout the films, diegetic pop music is used by the Guardians to take control of the sonic and physical spaces they inhabit. For instance: Vol. 1 opens on eight-year-old Peter Quill sitting alone in a darkened hospital waiting area, staving off sadness by listening to "The Awesome Mix, Vol. 1": a tape compiled by his terminally ill mother (Laura Haddock). Peter, his walkman, and the mixtape are the ostensible source for the movie’s popular music, cementing him as a central character with broad control over the film’s aesthetic. Peter’s is also the only origin story we will see on-screen, and it is exceedingly brief. After his mother passes away, Peter flees the hospital into the night, and is immediately abducted by a menacing alien spaceship. After this short vignette, the now-familiar Marvel Studios wordmark seems to announce that we have just witnessed the birth of a new hero: the driving brass and rapidly flipping comic book pages compare Peter audibly and visibly with Spider-Man and Captain America.

Yet that annunciatory fanfare is also an ellipsis: having posited this origin, Guardians skips ahead by 26 years, and omits many of the familiar trappings of superhero origin myths. There are no training montages, nor sequences in which Peter Quill gleefully experiments with newfound abilities. Peter is chosen, as Joseph Campbell’s “monomyth” demands; yet he has no mentor, nor does he undergo trials or temptations and emerge as a champion ready to fight. Perhaps true to their long, separate histories within Marvel’s back catalog, the other characters arrive more or less fully formed, with pre-existing relationships--the duo of Rocket (Bradley Cooper) and Groot--or family histories--for the shirtless strongman Drax (Dave Bautista) and green-skinned gunslinger Gamora (Zoe Saldana). Rather than focusing on the origins of the five individual characters, Guardians tells the story of their coming together and becoming (in an oft-repeated locution from the films) not only friends, but family; the first Guardians is at its core a heist movie, rather than a heroic Romance.

In fact, it will be quite a while before we hear another heroic fanfare: the opening minutes of the movie set the mixtape and the orchestral score in opposition with one another. When next we see Peter Quill, he is an adult, playfully dancing through the caverns of an abandoned planet to the tune of Redbone’s “Come and Get Your Love” (1973) on his Walkman. Again, he accompanies his own actions through his headphones, claiming both physical and aural space in much the same way as his glowing mask and flashlight push back the planet’s oppressive gloom. The Walkman falls silent when the scene cuts away from him, and portentous low brass chords signal the arrival of hostile aliens, who wrest control of the soundtrack. The orchestral soundtrack itself is thus cast from the outset as hostile: the distinction between the pop music favored by our heroes, and the orchestral underscoring--which signals danger and struggle, and clings to the film’s blue-hued antagonists in a cloud of angry minor thirds--becomes a narrative problem to be solved. As our heroes learn to trust each other, reconcile their conflicting motivations (each initially wants the film’s “Macguffin,” a mysterious orb, for their own selfish reasons), and work as a team, the orchestral score gradually coalesces into a recognizable theme.

A glimmer of this theme first appears as Peter Quill escapes from his initial encounter (“Quill’s Big Retreat” on the original soundtrack recording), but the brief moment of triumph is quickly buried amid tense high-register strings and Quill’s own comic mishaps. When the Guardians meet one another, they engage in an extended chase and fight over the orb; further fragments of the theme are heard as they are booked for disturbing the peace, and serve a jail sentence that forces them to work together. Later in the film, as Peter gives an inspirational speech, we hear the theme treated more fully on the piano (“To the Stars”), signifying the group’s growing resolve. And at the outset of the film’s climactic confrontation, the theme appears in its full, heroic form (“The Final Battle Begins,” transcription by the author): 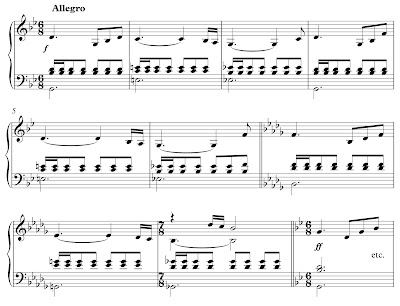 When we meet our heroes at the beginning of Vol. 2, their chemistry has clearly been established: we join them in the midst of a dangerous and highly lucrative assignment, preparing to fight a snarling, many-toothed monster. And while the characters still self-consciously employ diegetic pop music to underscore their own actions--Electric Light Orchestra’s “Mr. Blue Sky” (1977), the lead track from “The Awesome Mix, Vol. 2”--they now have the orchestra on their side as well: the soundtrack’s opening bars are a bold, clear statement of the heroic theme, as assertive and fully orchestrated as it was in its final guise from Vol. 1 (“Showtime, A-Holes”). This orchestral flourish performs much the same function as the brassy blasts that open James Bond or Star Wars movies: they signal that we have joined the action in media res, and that our heroes are busy doing the same thing they always do: save the day. The Marvel fanfare has already been heard, directly after the trailers and before a single frame of the sequel: with the team established as “galaxy savers” by the end of the first movie, there is no more myth-making labor for it to perform. Instead, the Guardians, now armed with both pop music and orchestral underscore, are off on another adventure.

William O’Hara received his Ph.D. in Music Theory from Harvard last week, and will join the faculty at Gettysburg College this fall. His research interests include tonal analysis, the history of music theory, and contemporary film and video game music. From 2013 to 2016, he served as an editorial assistant for JAMS.