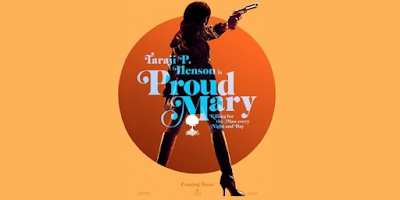 Sony Pictures Entertainment’s trailer for Proud Mary (2018, dir. Babak Najafi) begins with a stationary shot of the sun rising quickly over the beautiful Boston skyline. This alluring establishing shot is accompanied by the slow vamp of Tina Turner’s “Proud Mary.” The camera cuts to actress Taraji P. Henson doing push-ups and putting on make-up in concentrated close-up shots, accentuated by the song’s slow intro. As Henson slips on her black boots and black gloves, we realize that she isn’t the everyday modern working woman. This is further enhanced when a series of drawers open to reveal an arsenal of assault weapons. The song then accelerates, featuring extended brass and backup vocalists, accompanied visually by several quick and violent scenes that show Henson shooting bullets in rhythm to the music and downing Hennessy. Henson is portrayed as a skilled and merciless hitwoman for an organized crime family, until the end when the music abruptly cuts out as a little boy asks “who the hell are you?” Her response “I’m Mary.” Turner’s final cadence in which she fully articulates “Proud Mary” amplifies the appearance of the film’s title, presented in a font that is not only reminiscent of Blaxploitation films of the 1970s, but also of Quentin Tarantino’s 1997 film Jackie Brown.

This cover song and trailer harken back to earlier days of film production in which a film was created around a specific song, even taking the song’s title, a tradition to which Proud Mary clearly belongs. The song used in the trailer, however, is not the original rock version written by John Fogerty and performed by Creedence Clearwater Revival in 1968; it is the cover song performed by funk and R&B artist Tina Turner. With her ex-husband Ike Turner in the early 1970s, Turner had originally recorded a version that quickly became one of her signature songs, but the trailer uses an edited solo version, which follows the same structure as her previous recording. The smoky and soulful voice of Turner helps synthesize the song with the character of Mary in ways the CCR version could not. In the film, Mary’s life becomes more complicated when she crosses paths with the young boy after a hit goes bad. We can only assume that this boy will appeal to Mary’s maternal instincts, highlighting a major life change for a professional woman, amplified by Turner’s cover. Movie poster taglines for Proud Mary even provide a special twist on the lyrics, revealing that Mary is “killing for the man every night and day.”

Proud Mary enters a longer list of thriller-action films concentrating on the culture of professional assassins. However, it is quite out of the ordinary in Hollywood to feature not only a female professional killer, but a Black female professional killer. In the case where a child becomes involved and changes the lives (and values) of the assassin, the list becomes decidedly slimmer. This includes, for example, Léon: The Professional (1994, dir. Luc Besson) and both Kill Bill vol. 1 and vol. 2 (2003 and 2004, dir. Quentin Tarantino), but these films feature white assassin protagonists (Jean Reno in the former and Uma Thurman in the latter). Turner’s cover, which has been labeled as a musical source of empowerment for all women, becomes even more crucial here. Proud Mary stands out as an intriguing case in which music and narrative may play out side by side. I’m curious as to whether Turner’s cover, which was so integral to the trailer and to our early perceptions of Mary the hitwoman, will be used in the film or if another artist will come up to the plate with a new interpretation for 21st century audiences.

Dr. Jacqueline Avila is an Assistant Professor in Musicology at the University of Tennessee. Her research focuses on film music and sound practice from the silent period to present and the intersections of identity, tradition, and modernity in the Hollywood and Mexican film industries. She is currently writing her book manuscript titled Cinesonidos: Cinematic Music and Identity in Early Mexican Film (1896-1952), which is an examination of the function and cultural representation of music in the Mexican film industry.