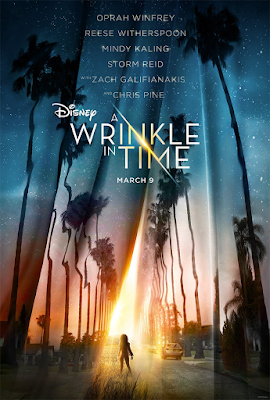 The teaser trailer to “A Wrinkle in Time” dropped eight months before cinematic release to high expectations and apprehensions: Madeleine L’Engle’s eponymous science fantasy novel has formed such an important part of so many childhoods that it was hard to imagine what director Ava DuVernay and Disney might do with it. Pundits seemed satisfied with what they saw, and were uniform in their praise of the trailer’s visual spectacularity and a-lister cast, while at the same time only mentioning its prominent cover of Eurythmics’ 1983 hit “Sweet Dreams (Are Made of This),” which nevertheless underscores—with interruptions—the entire trailer (the seemingly unrelated first twenty seconds are actually the newly composed intro to the song).

The song’s lyrics speak to the journey of Meg and her friends to find her father, including the hazards they will encounter along the way. The trailerized music both superimposes structure and unity onto the bewildering array of images and provides another layer of meaning to the teaser’s visual and narrated narratives, which complicates yet deepens the trailer experience for the audience. The use of “Sweet Dreams” evokes nostalgia for the song and its associations for the audience member, a hook that emotionally grounds the trailer and forges a link between past experiences of the book and the song. At the same time, the listener/viewers must mentally scramble to map faded memories of the book onto fleeting glimpses of characters and places. Press reviews of the teaser alternately describe the music as “haunting,” “moody,” and “mournful,” and several commentators observe the darkening effect of its slowing in tempo, in keeping with current trailer trends. The music’s threatening darkness—unusual for Disney—conflicts with the trailer’s visual brilliance, but it’s no coincidence that the last word of dialogue in the trailer—spoken by Oprah Winfrey as Mrs. Whatsit—is “darkness” and the end credits resonate out with an attenuating “everybody’s looking for something,” sung over the characteristic synth accompaniment.

Indeed, voice in its various guises is a significant component of the soundtrack. We can readily recognize the narrating voices of Chris Pine and Oprah Winfrey, sonic hooks that not coincidentally mark the most prominent celebrities attached to the project. But who is that singing “Sweet Dreams?” The identity of the cover artist is always a difficult question for trailers, yet one that the public invariably raises in the comments to the YouTube posting. For the Eurythmics’ song, perhaps the most noted and notorious cover is that of Marilyn Manson, yet his version would be too “esoteric” for Disney. Over 60 other covers exist for the song, including 48th Street Collective (2005) and Emily Browning (2011)—indeed, upon first hearing a number of listeners have supported the suggestion of Browning as the singer, whose video version has almost 16 million views on YouTube. She may adopt a languid ethos like that of the teaser soundtrack, but a close listening reveals how the vocal stylings and phrasing differ at crucial points. A thorough search of the Internet uncovers that the trailer version of “Sweet Dreams” was the work of LA composer/producer Mark Hadley, who was brought on to “produce an intergalactic, trailer-ized” rendering of the song. His 2:38 trailer-ready track features singer Keeley Bumford, aka Dresage, and relies on languorous singing, slow tempo, synth sounds, reverb, and sonic discontinuity for its effect. That the trailer house editor completely changed the ending of his track reflects the fluidity in the making of these mini-movies.

Devotees of the original song may well have difficulties over this reworking, which seems aimed at (young) fans of a dark, slow, free female vocal style that has elements of “shoegaze,” “dream pop” and/or “sadcore.” We hear it for example in songs of Lorde and Lana del Rey and their respective covers of “Everybody Wants to Rule the World” (the film The Hunger Games Catching Fire and the trailer to Dracula Untold) and “Once Upon a Dream” (video and trailer to Maleficent). The question remains, by what measure(s) do we assess cover versions? Faithfulness to the original? Adaptation to new stylistic norms? Creativity? Hadley and Bumford’s “Sweet Dreams” certainly won’t please fans of the Eurythmics’ synth pop classic, but in the context of the trailer to A Wrinkle in Time, the lyrics about searching and the music’s darkness make sense. And in any case, if the trailer cover will encourage the public to revisit or discover the original song, then all the better, whether or not they decide to see the movie.

James Deaville teaches Music in the School for Studies in Art and Culture at Carleton University, Ottawa, Canada. He has edited Music in Television (Routledge, 2010) and has co-edited Music and the Broadcast Experience (Oxford, 2016). He is currently working on a study of music and sound in cinematic trailers, a result of the Trailaurality research group that has been funded by the Social Sciences and Humanities Research Council of Canada. He is also undertaking a co-edited anthology on music and advertising as one of the Oxford Handbooks. He regularly gives papers at the Society for Cinema and Media Studies and Music and the Moving Image conferences (among others), and has published on music and media in Music, Sound and the Moving Image, the Journal of Film Music, and Music & Politics (among others).