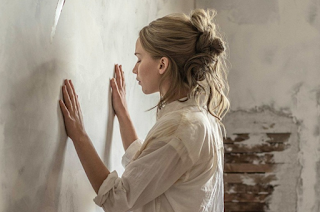 The season of fall horror movies is upon us; It reigns the box office and a slew of Halloween slashers will soon follow, but it is Darren Aronofsky’s Mother! that is generating the most debate. At once a psychological thriller and eschatological allegory, Mother! is perhaps more horrific than horror, though it brushes at the edges of the genre in several regards. The film dissects the relationship between “Mother” (Jennifer Lawrence) and “Him” or the Poet (Javier Bardem). As unexpected house guests arrive at their home, the poet nonchalantly and unceasingly undercuts Lawrence’s character at every turn. In this respect, I believe Mother! serves both as a metaphor for human existence and participates in a lineage of horror films concerning marginalized, tormented young women that undergo some sort of supernatural transformation (Carrie, Rosemary’s Baby, and The Witch come to mind).

The movie closely aligns audience members with the Mother. Over-the-shoulder, hand-held shots follow her throughout the home she has so lovingly restored for the Poet after a fire. Numerous extreme close-ups of Lawrence’s face as well as point-of-view shots strengthen the audience’s connection to the character. We share her sense of beleaguerment when Michelle Pfeiffer’s character, one of many unwanted guests, brazenly leaves the kitchen filthy after making lemonade, teases the Mother about her underwear, and interrogates her about having children. Lawrence’s character begs the Poet to dismiss the rude visitors, who multiply exponentially by the film’s climax. The Mother, now heavy with pregnancy, inspires the Poet to write after a long stretch of writer’s block. The success of the new work brings with it pilgrims hoping to meet the Poet. He refuses to turn the visitors away; he thrives on their adoration and abandons his wife’s love for the blind devotion of strangers. What begins as fanatic fervor transforms into a violent mob of anarchic disciples seeking to steal, consume, and destroy the Mother’s beloved creations: the home, and, eventually, her newborn son. Devastated and desperate, the Mother sets fire to herself and the home. All is char. Yet, she remains conscious in a black coal of a body while the Poet is unscathed. He carries her up to his study, where she bestows him with a final gift: her heart, now a crystal of flame. The Poet digs the crystal out of her chest and places it in a display stand. The world is renewed; the film “returns” to the beginning, with a new Mother.

Just as the narrative and cinematography work to generate audience empathy for the Mother character, so does the sound design. The soundtrack for Mother! exploits sound design to effectively arouse tension and fear. In this, it is hardly unique; horror films from Hitchcock’s The Birds to Peele’s Get Out utilize sound to heighten the cinematic sensorium. Mother!, however, pushes the boundary between sound and music in a specific way. I argue that not only can we consider sound as musical in the film (a Cagean approach to listening that befits many horror films), but that sound in Mother! does the semiotic heavy-lifting that is typically expected of an underscore. In other words, not only does sound seem musical, it acts like music in the film. The aesthetic of sound rendering along with a few key sound effects contribute to this phenomenon.

In Mother!, sounds are hyper-rendered; they are sweetened with reverb and raised to the foreground of the audio mix. From the very opening of the film, this super-sonicity is associated with the Mother. Throughout the film, it is as if auditor-spectators hear through her tinnitus-afflicted ears. The groans of the house reverberate through the auditorium thanks to Dolby stereo. The sounds emitted by the house envelop the audience; it is as if the structure replicates an in utero soundscape. External to the body, electric lights buzz like lightening, a broken teacup rings its destruction without decay, water, wind, crickets all are hyper-realized in the soundtrack. This effect is used most powerfully towards the climax of the film. The Poet steals the newborn son from the dozing Mother’s arms and passes the crying babe to his thralls. Like a demented crowd surfer, the baby floats on the hands of the mob; at the doorway a disgusting thud, offset by a silent pause, reverberates through the soundtrack. I gasped at the shock of it; auditor-spectators, like the Mother, are attuned to the sounds of the newborn and horrified by the sound of his head being crushed. It is the sound of finality. Overall, the hyper-rendering of sound effects lead auditor-spectators to hear from the point of audition of the Mother; they are thus encouraged to empathize with her position in the narrative.

Two other effects work as narrative bookends for the film. The first appears during the opening credits; the sound of a nibbed pen echoes in synchronization with the animated scrawl of Mother! in the title credits. The scratching immediately informs auditor-spectators of writing’s centrality to the story. Yet, the sound is sweetened with an effect reminiscent of the unsheathing of a sword. There is a violence to these handwritten words, a violence made apparent in the film’s final half hour. The end credits complete this impression. After a haunting cover of “The End of the World,” the sound of the slashing pen returns, illuminating the end credits. The ink blots splatter like the blood of the baby and the Mother that the audience saw destroyed a few minutes earlier. When natural sound effects like the chirping of crickets encroach on the sound effect of the pen during the end credits, it seems as if nature might remedy the world of violent logos.

Immediately following the opening credits with the metallic scratch of writing, the audience receives a sound advance. The screen remains darkened while the sound of fire blazes in stereo. A close up of Jennifer Lawrence’s face aflame fills the screen a second later. The emphasis on the sound of fire before the film’s visual narrative begins is a striking one. It indicates through sound the thematic relevance of fire to the story. Beyond this, the sound of the fire is deeply elemental—it is a giver and destroyer of life, ruinous and purifying at once. Over the course of the film, the audience discovers that it is the sound of the Mother, the cyclically ravaged and renewed muse to Him.

While Mother! is not a horror film in the traditional sense, in many aspects it functions like one; its story reveals humanity’s deepest fears and dark desires. What is so haunting about the film is the accumulation of minor offenses into something of apocalyptic proportions. It can be read as allegories of humanity’s relationship to nature, to gender politics, and to Christianity. However we choose to perceive Mother!, one thing is clear: the soundtrack invites us to listen to the marginalized and maltreated. It is in this act of listening that we might lay a foundation of empathy upon which a home can be rebuilt.

For more on this, see Kaja Silverman, The Acoustic Mirror: The Female Voice in Psychoanalysis and Cinema (Bloomington: Indiana University Press, 2008), 101-140.

Brooke McCorkle is an opera and film music scholar. She is currently a Visiting Assistant Professor of Musicology at SUNY-Geneseo. Her published and forthcoming works address topics as varied as Star Trek Concerts, Wagner reception in Japan, and ecological critiques in monster cinema. Please see here for more information.