Putting it Together: The Anatomy of a Solo YouTube Cover 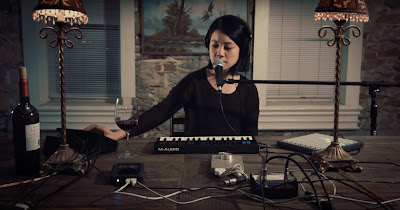 (Source: screen grab from https://vimeo.com/88165960)
Flanked by two wrought iron lamps, a young woman sits in the center of the frame. To her right, a large glass holding two fingers of red wine sits among a nest of electronics: a small keyboard, a squat black “harmonizer” box, and a glowing, gridlike MIDI controller. The room is richly textured: with an expansive table of reclaimed wood and the exposed stonework of the wall hovering just out of focus, the woman's surroundings are far removed from the run of the mill "American Room" that often characterized early viral videos: beige, generic, poorly lit, and shot from the upward angle of an open laptop. This is YouTube 2.0, and the production values have risen exponentially.

Yet, as the film rolls, there is a palpable sense of being “before the beginning.” The woman looks askance at a second camera, which bobs as if its tripod is still being adjusted. She speaks into the microphone: “Yup, yup, is this thing on?” The harmonizer splits her voice into cacophony. “Yeah!” she sings triumphantly in response to her own question; given a pitch to grab onto, the black box's voices coalesce into a chord, supporting her cry with a deep bass tone and a piquant minor third.

The young woman is Kawehi (kuh-VEH-hee), a Lawrence, Kansas-based musician. Kawehi’s solo performances layer together loop upon loop, combining her voice with an array of  synthesizers, drum machines, and guitars. While she writes original songs, tours nationally, and has released several records, much of her initial exposure came from a series of well-choreographed videos of recognizable cover songs. Her cover of Nirvana’s “Heart-Shaped Box” went viral in the spring of 2014, garnering extensive online coverage and more than 3 million views between Vimeo and YouTube. 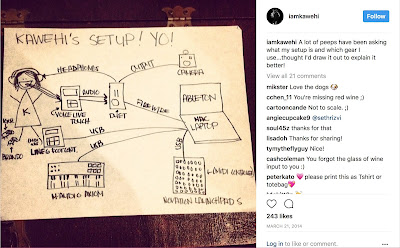 Kawehi’s videos often start by showcasing her process: she builds the song piece-by-piece before it properly begins. The economy of pitches and rhythms used--Kawehi crafts her accompaniment out of only three notes--and the versatility with which those elements can be layered and re-contextualized by altering a single note, reveal the degree to which Kawehi has analyzed the song, paring it down to a skeleton and re-animating it one layer at a time. As shown in the video below, she artfully records the pieces of “Heart-Shaped Box” in reverse, assembling it “in plain sight” (or sound?), but in a manner that obscures what the final product will sound like until it is complete. Beginning with her voice (filtered through the harmonizer), she records the upper voices of the two-chord post-chorus interlude. Next, she fills in its bass notes with the keyboard, and then records the vocal percussion loop that will underpin the entire song. Cutting off her initial loops with a few keystrokes, Kawehi next records backing vocals for the verse (an acapella chant, made eerie by the vocoder’s minor third) and the chorus (the energetic “YEAH!” first heard at the beginning of the video). After recording another synthesized bass line, she performs the song’s famous guitar riff. Finally, with another off-camera keystroke, she silences the thicket of loops she has constructed; Kawehi sings unadorned, and the song as we know it begins.

Kawehi’s cover of “Heart Shaped Box” brings together at least two distinct brands of solo performance: the well-established practice of live looping, and the younger, distinctly YouTube-era trend of “full band” covers executed by single musicians.[1] The former tradition can be traced from fourteenth-century England (which saw performers playing pipes and drums simultaneously, one in each hand), through the more familiar “one (wo)man bands from the late-nineteenth century to the present.[2] With the advent of delay pedals, samplers, and other tools, contemporary carriers of this tradition include pop stars such as Ed Sheeran, the intricate improvisations of Reggie Watts, the layered collages of Zoë Keating, and the multimedia performances of artists Laurie Anderson, and Pamela Z. In fact, Susan McClary’s description of Anderson might well apply to Kawehi:


[H]er compositions rely upon precisely those tools of electronic mediation that most performance artists seek to displace. … most modes of mechanical and electronic reproduction strive to render themselves invisible and inaudible, to invite the spectator to believe that what is seen or heard is real. By contrast, in Laurie Anderson’s performances, one actually gets to watch her produce the sounds we hear. But her presence is always already multiply mediated: we hear her voice only as it is filtered through Vocoders, as it passes through reiterative loops, as it is layered upon itself by means of sequencers. … The closer we get to the source, the more distant becomes the imagined ideal of unmediated presence and authenticity.[3]

Kawehi’s videos also open up onto a separate tradition that has developed on YouTube over the past decade: solo musicians using multitrack recording and visual effects to “clone” themselves into entire ensembles. Searching YouTube for “solo cover” or “solo full band” turns up hundreds of videos. Many of them use Brady Bunch-like tiling, echoing visually the parallel construction of a multitrack recording. They vary widely in the genre (heavy metal and video game soundtracks are particularly popular), and complexity, from guitar/bass/drum combos recorded in bedrooms and basements, to entire acapella choirs and virtual armies of synthesizers and guitars, as in the example below.


As scholars like Kiri Miller and Phillip Auslander have emphasized, musical performances are always a matter of both authenticity AND artifice, particularly when they are being presented digitally.[4] Kawehi presents a kind of cinema verite, letting us see behind the scenes by frequently leaving a few trailing seconds at the beginnings and ends of videos. She sometimes broadcasts live “vlogs” (video blogs) to her fans, such as a 2016 pre-tour video in which she describes all of her equipment, and responds to fan chats in real-time. At the same time, her performances themselves are carefully staged, framed, and lit: polished productions far beyond the casual, bedroom-and-basement fare so common to YouTube.

Pop arrangements are supposed to unspool slowly, over three or four minutes. The introduction showcases the chord progression, and perhaps a hook. The first verse is spartan; harmonies enter at the chorus, if not later. Backup singers, countermelodies, and horns join in. A guitar solo might signal a song’s moment of maximum excitement, while an extended fade-out (often featuring every instrument laying around in the studio that day) seems to imply that the jam could go on forever, if not for the limitations of time and tape.

Kawehi playfully inverts this rising action. Every riff she records is a piece of Chekov’s Gun, disassembled on the table for cleaning; the entire introduction is a structure of promise that lays bare the anatomy of the song: a musical analysis performed as entertainment. The iconic guitar riff, for example (the first recognizable fragment of the song that we hear), foreshadows the climactic moment of the chorus, when she will sing along with it in unison: a moment made all the more intense because we heard its piecemeal construction earlier in the video. Kawehi manipulates these musical pieces with the nonchalance of an expert, her economical fingers dancing across the neon grid of the MIDI controller. Not a cycle is wasted as she hums and beatboxes, blending mechanical synth pads with the pitch-bent simulacrum of an electric guitar. With her economical use of pitch material and deft manipulation of Ableton, Kawehi acts as much a DJ or a conductor as she does a singer.

Cover songs are ripe for this sort of treatment, and rather than striving for fidelity -- as the complex “full band” covers found elsewhere on YouTube do -- we see in minimalist covers like Kawehi’s, the transformative potential of arrangement. The pleasure of a cover song lies in juxtaposing familiar melodies or well-known lyrics with unfamiliar textures, timbres, or tempos. The frisson of recognition collides vertiginously with an unfamiliar affect, or the unexpected intimacy of an acoustic vocal: a phenomenon also exploited to great effect in movie trailers and comedy acts. In his book Listen: A History of Our Ears (2008), philosopher Peter Szendy evocatively calls this kind of double listening plastic, or even elastic.[5] Indeed it is: in Kawehi’s cover, we can often hear both Nirvana’s original, and her deconstruction of it. The song is stretched, squeezed, and molded into something new. As Kawehi teaches us how to re-listen to a familiar song, the original is left forever changed and enriched.
***
[1]For more on live looping and other techniques of electronic performance, see Mark Butler, Playing With Something That Runs: Technology, Improvisation, and Composition in DJ and Laptop Performance (Oxford and New York: Oxford University Press, 2014).
[2]For more information, see The Continuum Encyclopedia of Popular Music of the World, Volume 2: Performance and Production (London and New York: Continuum, 2003), 48-49.
[3]Susan McClary, Feminine Endings: Music, Gender, and Sexuality (Minneapolis: University of Minnesota Press, 1991), 137.
[4]See Kiri Miller, Playing Along: Digital Games, YouTube, and Virtual Performance (Oxford and New York: Oxford University Press, 2012); and Phillip Auslander, Liveness: Performance in a Mediatized Culture (London: Routledge, 2008).
[5]See Peter Szendy, Listen: A History of Our Ears, trans. Charlotte Mandell (New York: Fordham University Press, 2008), 35-39.
***

William O’Hara is Assistant Professor of Music at Gettysburg College, and taught previously at Tufts University. He received his PhD from Harvard in 2017, and from 2013 to 2016 was an editorial assistant for JAMS.