Quick Take — Motives, Modulations, and “The March of the Resistance” in The Last Jedi

If there is a thematic through-line in the score for Star Wars Episode 8: The Last Jedi, it is "The March of the Resistance." Introduced in The Force Awakens as a stern counterpart to the zippy "Rebel Fanfare," the march is written in the severe style that Williams has recruited throughout his career to signify bold, decisive action. The theme’s employment in Force Awakens was sparing, appearing prominently in only three cues. For the second installment in the Sequel Trilogy, it occupies a more significant role. The March shows up in numerous guises, both foregrounded and understated, rousing and defeated. It also connects with a handful of new heroic motifs, especially the grandiose theme which accompanies Admiral Holdo's self-sacrifice near the film's climax.

One respect in which the Resistance March permeates the score for The Last Jedi involves a tonal transformation rather than a melodic gesture. Many of Williams’s themes for the series involve characteristic harmonic progressions: the subtonic half-cadence in the “Main Theme,” the i↔bvi oscillation in the “Imperial March,” the dorian IV (and later phrygian bII) chord of the “Force Theme.” On occasion, these ideas detach from their melodic scaffoldings to act as either free-floating “leit-harmonies” or, alternatively, as factors in steering Williams’s highly modulatory underscore. A good example of the former is the motivicization of the Rebel Fanfare transformation (i.e. CM→AM) throughout The Force Awakens. The latter is exemplified during the approach of the second Death Star in Return of the Jedi; there, key changes between i↔bvi related regions drive the tonal surface and reinforce Vader’s harmonic signature—and thus control over the scene—without stating his theme outright.

On a measure-to-measure level, the “March of the Resistance” (MotR) is not especially marked harmonically, remaining squarely in a minor-diatonic space during each of its sub-phrases. But across phrases, it’s tonally mobile, reliably transposing itself up a perfect fifth, sometimes through several sequential iterations. This transpositional strategy is tied with the neo-baroque idiom in which Williams stylizes the theme, particularly in its concert arrangement, whose midsection showcases a loose three-voice fugato, which I’ve transcribed and annotated below.


[March of the Resistance, Fugato Section] 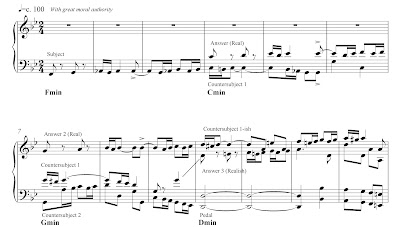 Within this fuguelet, Williams employs only “real” answers, as opposed to course-correcting “tonal” answers. This means the necessary melodic adjustments to return each subsequent statement of the subject back to the home key are never made. The result is a decidedly non-Bachian modulating fugal exposition, starting in F but continuously ticking clockwise around the circle of fifths, landing eventually in D-minor. This harmonic trajectory gives the section a strong feeling of intensification, a kind of inversion of the usual relaxing affect of “plagal drift” (Cohn 2012: 190) because, in a fugal context, each key-change is felt to be a tonic→dominant progression rather than a subdominant→tonic resolution. A melodic reduction below illustrates how everything during this “fugato” is impelled by a simple chaining of ascending diatonic pentachords, where scale degree 5 of the previous key serves as scale-degree 1 of the next key.

Despite its striking construction, this fugal presentation of the “March” has yet to appear in any actual Star Wars underscore. Prior to The Last Jedi, neither had the “March’s” distinctive modulatory plan. More typical is the way it is presented during a briefing scene in Force Awakens, where successive phrases are connected through a hodgepodge of largely chromatic key-changes [F♯m→C♯m→Em→Bbm→Cm] rather than a systematic sequential or transpositional plan.

The fact that tonal design in Williams’s Star Wars scores is generally directed by seconds and thirds makes the arrival of music based on the perfect-fifths of the “March” analytically salient. This is indeed what happens across a number of cues in The Last Jedi, both in spots where the leitmotif is directly employed, and a few contexts where the fugue’s modulatory routine is divorced from the March’s specific melodic content, making it a genuine leit-harmony (or perhaps, leit-transformation). Appropriately enough, the apotheosis of this fifth-chaining transformation is the poignant chorale heard as Rey uses her force powers to their fullest extent yet. Melodically, the moment refers to no other leitmotif; harmonically, it is the natural result of a tonal transformation we’ve heard over and over.

The First Order’s surprise attack on the Resistance nicely illustrates a melodic motif can evolve into a harmonic one. The excerpt shown below in reduction is melodically related to the MoTR’s melodic basic idea (and anticipates a powerful new “Desperation” motif), and its underlying tonal scheme alludes to the fugato. The initial fifth motion [Bm→F#m] doesn’t go far, but a chromatic adjustment then commences a climb from Fm to Cm to Gm and (with a partially elided Dm) eventually lands on Am, when all hell really breaks loose.

The most sustained application of this ascending-fifths strategy occurs during the film’s opening set-piece cue, entitled “Escape” on the soundtrack album. Over the course of a minute, the track spins from F-minor all the way to C#-minor, via a modulatory chain that covers, without interruption, a full nine stations along the circle of fifths. The reduction below charts the music’s progress, with bar-lines demarcating separate modules and wavy lines indicating areas of tonal ambiguity. The beginning stages refer explicitly to the “March.” But once D-minor is reached, its familiar melodic contours are replaced by thematically nondescript material. By the time F#m appears, a stirring new motif, derived from the MoTR’s B-theme, announces its presence. Then everything dissolves back into amorphous, atonal tension music and the trip down modulatory lane is done.

Except this is not how it actually happens, not in the actual film at least. The “Escape” as presented on the soundtrack is shockingly different than the score in the film, with entire sections inserted, reshuffled, or cut. The actual film version of the musical set-piece is missing the entire Fm→...Gm leg of the journey, while the Gm→...Am and Em-→...C#m segments are separated by minutes worth of different material. Thus, while some substantial portions of the fifth-chain are certainly still operative, the links are severed in several places and tied together with completely different types of harmonic material. The reduction below illustrates a larger slice of the “Escape” —as actually appears in the final mix of the soundtrack, replete with splices, interpolations, and many, many micro-edits.

It is difficult to say which is the “correct” version of the cue, or if a definitive version exists at all. The album “Escape” might have been assembled so as to provide a more coherent listening experience, and the full extent of the chain-of-fifths could have been Williams’s original intent or simply a happy accident. As is the case with all the Star Wars scores, the degree of musical integration across cues (let alone whole scores) is a thorny issue and a site of active research, particularly in the work of musicologist Chloe Huvet. Structural integrity is compromised at every turn by the strongly disunifying forces of temp-tracking, cutting, tracking, and the all the other vagaries of editorial subordination to which film music is subject.

Nevertheless, the “March of the Resistance”—and its distinctive modulatory maneuver—remains a striking and novel aspect of the Last Jedi’s musical make-up, both in and outside of the film. It just so happens to also serve as an object lesson in what harmony can (and sometimes cannot) do to structure narrative.

Frank Lehman is an Assistant Professor of Music Theory at Tufts University. His work on chromaticism in film music will appear in a forthcoming monograph with Oxford University Press. Website HERE