Talent Scouts, Drunk Musicians, and other Recording Adventures in the Acoustic Era

Between 1905 and 1926, recording scouts of the Victor Talking Machine Company established temporary recording studios across Latin America. After setting up their equipment, these scouts faced multiple challenges, including identifying local talent, negotiating copyright deals, and, sometimes, wrangling tardy, drunken performers into the studio. The recording scouts were attempting to follow Victor executives’ master plans to open up new markets for the phonograph. Yet, it was up to these scouts and the people they worked with to figure out how to put Victor’s plans into practice. Some procedures, especially in relation to the operation of the technology of acoustic sound recording, were somewhat standardized. Likewise, some expectations were clearly set by the company. Nevertheless, the scouts had to make an unpredictable array of spontaneous decisions. Just like many of the musicians they brought in front of the recording horn, they were often playing by ear. Such improvisatory interactions, I believe, are at the center of the music industry’s worldwide expansion.<1> 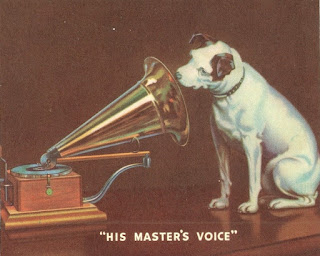 Victor Talking Machine Logo, c. 1905
Over the course of at least twenty trips, these scouts recorded seven thousand selections. Most of the time two scouts were deployed and they spent between one and three months on tour. Their luggage included a portable recording machine, several flat wax masters, recording horns of various sizes and shapes, sound boxes, spring motors, and dynamos. Setting up makeshift recording studios ––or laboratories as they called them–– was a constant test for their imagination. As some sketches in the scouts’ travelogues show, the goal was to replicate the basic layout of the two adjacent rooms used at Victor’s headquarters in New Jersey; the recording machine was usually concealed in one room and only the horns breached through a wall ––or a curtain–– into the performers’ room.<2> Things usually did not go according to plan. Recording sessions took longer than expected, musicians needed more practice or had a hard time accommodating to the sound-capturing limitations of the technology. When playing live, time was not usually a major constraint, but in the studio, performers had to cut or add sections, change the tempo at different spots, alter dynamics, modify lyrics, or improvise arrangements. 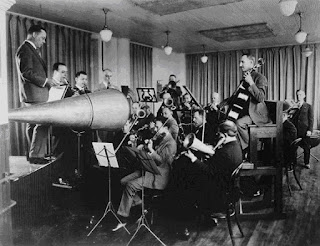 Acoustic Recording of the Victor Salon Orchestra, c. 1920. [Published in Leech-Wilkinson, The Changing Sound of Music, available at http://www.charm.rhul.ac.uk/studies/chapters/chap3.html]

As if dealing with the vulnerability of the recording equipment was not hard enough, the scouts had to assume unpredictable roles. They acted as business representatives, legal advisors, cultural mediators, translators, vocal coaches, talent scouts, music producers, journalists, and even lobbyists. Sometimes they even had to figure out how to get the musicians in a suitable physical condition to perform. On October 23, 1917, for example, Victor scouts were making recordings in Guayaquil, Ecuador. They were expecting a “Band,” seemingly one of the ensembles of either the Police or the Military, for a session that was supposed to begin at 8:00am. At 9:30am, however, the scouts called the Band headquarters to report that out of the 25 men expected only 10 showed up. They could not make the scheduled recording, but not only because of the lack of personnel. In the ledgers, the scouts wrote: “Holiday yesterday and the majority are intoxicated, Commander said.” Apparently, both the musicians who did not show up —and the ones who did— were drunk. Unable to play their instruments, they hung out in the studio, coping with their hangovers while the scouts scrounged up some food for them: “Had 100 B.B., large pot of soup, sandwiches, etc. ordered.”

That was not a good day for recording. Following this drunken incident, the vocal duet of Anura García and Clara Hauston made some recordings that did not even go beyond the trial stage. After them, another music group came into the studio and performed so poorly that the scouts simply wrote: “Records by Orquesta: Started two records. Mistakes. Lost two blanks. Called date. Told [them] to practice.” For the scouts, the recording expeditions not only entailed the potential encounter with unfamiliar or “exotic” musics, either pleasant or not to their ears. It also involved engagement in a cross-cultural journey in which almost anything could happen. And considering the ample range of selections captured ––from operatic renditions to all sorts of popular musics to recitations, comic sketches, and jokes–– it was a journey of discovery in which almost anything could become a good-selling record. 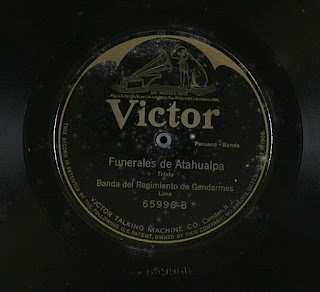 Capturing local music numbers on wax implied the potential circulation of these recordings far beyond their local audiences and traditional performance venues. Yet, rather than allowing for the portability of all kinds of vernacular musics, the scouts’ improvisatory interventions implied significant doses of arbitration in the globalizing ventures of the music industry. Who made it to the studio and what repertoires turned out to be massively disseminated depended on the aesthetic and/or acoustic judgments of the scouts, the frequent random selection of musical numbers, and the convoluted networks of local artists. The commercial paths record companies took in their global expansion were, as acoustic recordings themselves, ventures of trial and error.<3> Nonetheless, scouts’ extemporaneous actions on the ground are just traces of a bigger picture. To a significant extent, improvisatory practices ruled in the recording industry in the early twentieth century. The fulfillment of the industry’s global ambitions relied on a permanent reconfiguration of business plans, technological devices, consumption patterns, cultural referents, and of the industry itself.

Recording scouts helped companies like Victor create commercial empires that operated in tandem with the modern imperial enterprises of the United States. While on tour the scouts took advantage of imperial resources and networks. At the same time, they provided other networks and resources for the colonial agendas of the U.S. By sending convoys of recording scouts to open new markets for the phonograph, Victor was also opening, in a way, markets for US goods in general. In the same way, Victor benefited from the imperial structures and the spheres of economic and cultural influence of the United States. The US foreign policy of interventionism throughout Latin America in the early twentieth century is one of the most eloquent examples of these political and economical entanglements. In the milieu of the machine-age imperialism,<4> itinerant troops of recording scouts helped shape the unprecedented global contours of the entertainment industry. Amidst drunken performers and mesmerized audiences, they inaugurated practices of corporate colonialism that we now take for granted.
***

<1>Besides my own research project on Victor’s expeditions through Latin America, the activities of recording scouts in different parts of the globe has not been significantly studied, except by Karl H. Miller and Michael Denning. Fred Gaisberg’s Music Goes Round is perhaps the most emblematic account published by a scout, referring primarily to his activities in Europe and Asia. Some of his diaries, including his adventures through East Asia, are available online: http://www.recordingpioneers.com/docs/GAISBERG_DIARIES_2.pdf
<2>See: Daniel Leech-Wilkinson, The Changing Sound of Music: Approaches to Studying Recorded Musical Performance (London: CHARM, 2009), Chapter 3, Paragraph 13–20, http://www.charm.rhul.ac.uk/studies/chapters/chap3.html; C. A. Schicke, Revolution in Sound: A Biography of the Recording Industry, 1st ed (Boston: Little, Brown, 1974), 73; George Brock-Nannestad, “The Objective Basis for the Production of High Quality Transfers from Pre-1925 Sound Recordings” (Audio Engineering Society Convention 103, Audio Engineering Society, 1997), http://www.aes.org/e-lib/browse.cfm?elib=7169.
<3>Schmidt Horning, Chasing Sound, 11.
<4>See: Jeremy F Lane, Jazz and Machine-Age Imperialism: Music, “Race,” and Intellectuals in France, 1918-1945 (Ann Arbor: The University of Michigan Press, 2013), 7–9.
***