If one were to search the phrase “what is world music” and scroll past the list of upcoming local concerts and festivals conjured by search engine optimization, one would quickly come across a 2012 article by Ian Birrell for The Guardian, titled “The Term ‘World Music’ is Outdated and Offensive.” The author condemns this marketing silo for non-Anglo artists on the basis of its valuation of cultural rootedness-as-purity and as a disavowal of the digitized and highly mobile world in which most people now live. His loathing for this designation, however, does not prevent him from exploiting the marketing potential of defining difference according to a geographic otherness: He is co-founder of a London-based concert promotion and production company called Africa Express. To a degree, I empathize: enticing concert-goers thirsty for something other than the mainstream pop fodder of the major labels and live event companies with the promise of a soundscape of exotic elsewheres is a profitable and personally fulfilling strategy for many concert curators and producers—myself included. As director for international yoga, dance, and music festival BaliSpirit, I catered a stage line-up to Californian and Australian yogis and digital nomads island-hopping between Bali and Phuket by booking musicians and dancers from First Nations and the Global South, who would match in performative spectacle the festival’s exotic tropical backdrop. I rebranded the world music concert series as “One World, One Stage,” as a strategy to downplay the tokenistic presentation of difference and convey the cosmopolitan’s vision of one human tribe. But in retrospect, I did little to challenge the festival’s appropriative tendencies or discourage cultural stereotyping.

In subsequent professional roles in the public and private sectors, I generally managed to avoid the ethical problem of world music as genre or creative and professional “ghetto,’ to borrow from Senegalese singer Youssou N’Dour’s assessment of the music industry’s handling of “nonwestern” musicians in a 2000 interview.<1> In 2017, I opened a new professional chapter as an academic ethnomusicologist. Now, I must contend with a teaching mandate to design courses that “engage with difference and diversity,”<2> and ethnomusicology’s culpability for the persistence of world music as a core requirement in conservatories and music departments. This new role compels me to question: What are universities really trying to accomplish by insisting on diversity in curricula? “Diversity” to what end? Are academics challenging or reinforcing the white male domination of the classical music canon with such requirements? Can a world music “survey course,” a mainstay in many American college and university curricula and charge of many early-career ethnomusicologists, offer anything more than superficial coverage of music traditions that have been canonized by world music textbooks and bear a resemblance to European colonial expeditions? Or should such courses be exorcised from music curricula, as neocolonial specters?

In my current post as a music industry professor for a program oriented toward professional development rather than theoretical inquiry, I do not necessarily have to answer most of these questions. But I do have to contend with the preparation of students entering a profession carrying global economic and social impact, which will shape both how they interact with professionals who do not share their socioeconomic privilege and also what they envision as sustainable, ethical business practice. So I have been compelled to offer a “Global Music Industries” course as supplement to a curriculum focused largely on U.S. music business opportunities and developments. Thus, like colleagues at other institutions leading world music survey courses, I am doing my best to cover the “rest” of the world’s music, largely ignored by music curricula, and yet still avoid tokenism and the allure of cultural competence.

The course’s practical objective is to help prepare students for international music careers involving activities such as international touring and contract negotiations or the navigation of diverse legislation on licensing and IP protection across national borders. Students encounter modes of music production and consumption through diverse knowledge sources, such as ethnographic studies and industry trade reports, with a focus on grounded practice outside the U.S. music industry and its global conglomerates. Course content is organized topically by professional practices and challenges, such as recording and record labels, live performance, market research, instrument manufacturing, government interventions, and emerging business models. A strong focus on peripheral markets—vis-à-vis mainstream entertainment conglomerates—provides an exercise in “mainstreaming,” to borrow from Anne Rasmussen, diverse modes of music professionalism.<3> The ethnographic studies, in particular, introduce professional activities that are both familiar in practice and culturally distinctive. Students encounter, for example, album sales strategies along the North American powwow trail,<4> payment structures in a New Delhi recording studio,<5> pirates as crucial distributors within Myanmar’s popular music industry,<6> and digital activism as a core professional activity among Indonesian recording artists.<7> 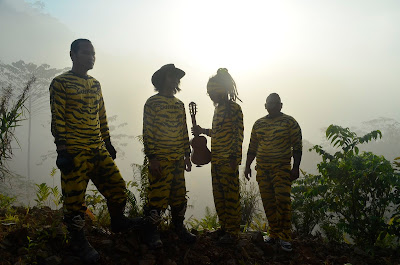 Indonesian rock band Navicula during their tour of Kalimantan (Indonesian Borneo) to raise awareness about deforestation and its impacts on indigenous communities, wildlife, and the global climate. Photographed by the author.

Rather than focusing on how students might navigate these diverse markets, the course encourages them to explore the myriad ways in which professionals consolidate music production, distribution, and consumption. The course’s implicit objective is to encourage these students, most of whom will work within the dominant music industries of the United States, Europe, or China to a) dispute the narrow definition of music’s value as consumer good propagated by the highly regulated, centrally controlled, capitalistic recording industries with which they are most familiar and b) recognize their own complicity with unequal access to resources for producing and consuming music.

Unfortunately, in the course’s first iteration, student self-assessments and teacher evaluations suggest that the implicit objective was not achieved. This is due, in large part, to my decision to keep this priority objective close to the vest, based on my concern that students might reject a blatant challenge to modern music business practices. Instead, I might have explicitly insisted on critical engagement with core business values and ethics. An additional problem is that the stated objective’s focus on preparing students for fruitful careers imparts a goal of economic dominance that is at odds with the implicit objective. Thus, the course could be critiqued as providing training grounds for ongoing musical imperialism.

With fine-tuning, however, courses like “Global Music Industries” might offer an interesting alternative to world music survey courses. By focusing on music in practice and profession, rather than as aesthetic tradition, such courses could denaturalize current business models that coalesce power in a corporate oligopoly and accelerate creative homogenization. They could prioritize entrepreneurial thinking about sustainable music practice and stimulate critical engagement on the common ground of professional practice shared by recording and touring artists worldwide.

Key to these outcomes would be an explicit rejection of cultural competence as a course outcome and instead the adoption of the lens of critical awareness. This notion, developed through research on healthcare and social services for diverse populations, provides useful pedagogical frameworks, whereby instructors would support students in working toward the principles of “‘curiosity’ and of ‘informed not knowing,’” to use the words of social work scholars Mark Furlong and James Wight.<8> In such approaches, the aim is not to accumulate a body of knowledge about cultural and professional others; rather, critical awareness “establishes a context for practice that regards ‘the other’ as a mirror upon which the practitioner can see the outline of their own personal, professional, ideological, and cultural profile.”<9> By explicating critical awareness as a course objective, instructors would challenge students to recognize the plurality of music professionalism and their own positionality within it and to undertake global creative exchanges through a lens of informed not-knowing—a lens that prevents them from seeing the world’s musical traditions as territory to acquire.

If one were to take, at face value, university diversity requirements as strategies to foster inclusivity, mutual respect, and collaboration, then one would be compelled to advocate for the continual inclusion of courses introducing diverse musics and musical values, as a means to critically engage with intersectionality, define music as a rightful human experience, and build students’ commitment to equal access to music production and consumption. Such courses would overtly confront the inequities created by regional or cultural differentiation, the canonization of certain traditions over others, and the accumulation of cross-cultural knowledge as the means to succeed in a digitized, mobilized world. Perhaps, then, we could effectively equip students with the global curiosity and cosmopolitan responsibility required to make a world of difference in how we all experience music.
***
<1>N’Dour, quoted in Taylor, Music and Capitalism, p. 89.
<2>“Engaging Differences and Diversity.”
<3>Rasmussen, “Mainstreaming American Musical Multiculturalism.”
<4>Scales, Recording Culture.
<5>Booth and Shope, More than Bollywood.
<6>MacLachlan, Burma’s Pop Music Industry.
<7>Moore, “My Music, My Freedom(?)”
<8>Furlong and Wight, “Promoting ‘Critical Awareness’ and Critiquing ‘Cultural Competence,’” p. 39
<9>Ibid.
***

Ethnomusicologist Rebekah E. Moore has returned to the United States and American academe after a decade-long career in Indonesia, where she worked in public programs management, concert and festival production, and band and tour management. Last Fall, she joined the music faculty at Northeastern University, in order to teach undergraduate and graduate music industry courses and coordinate the graduate certificate programs in arts administration and cultural entrepreneurship. Prior to accepting this position, Rebekah was Senior Manager for @america, the world’s largest center for U.S. public diplomacy, located in Jakarta. Rebekah has published articles in the Asian Journal of Communication, Asian Music, Collaborative Anthropologies, and Inside Indonesia. She is co-founder of Bersama Project, an Indonesian nonprofit foundation that supports musicians and artists to stage creative interventions on violence against women and LGBTQ+ young people, an organization to which she continues to contribute as Project Advisor.