From the Archives: Finding the Unexpected

As anyone who has engaged in archival research can attest, what one discovers can be rewarding, but also, as the saying goes, not so much. Yet every once in a while what one uncovers can be downright delightful, as I was reminded during a July 2017 trip to New York City.

What took me there was the Chancellor Robert R. Livingston Masonic Library of the Grand Lodge of New York (http://nymasoniclibrary.org/). My goal was to gain a contextually richer understanding of Friedrich Schiller’s 1785 poem “An die Freude” (To Joy), a poem made famous by Beethoven’s partial and reordered use of it in the finale of his 1824 Ninth Symphony. As it happens, Schiller’s poem was immensely popular both before and after Beethoven, and nowhere more so than among German Freemasons. Schiller’s verse, whether by itself, or, less often, when included in the guise of a song setting, runs through Masonic publications during the last quarter of the eighteenth century and even after the Ninth like a red thread. 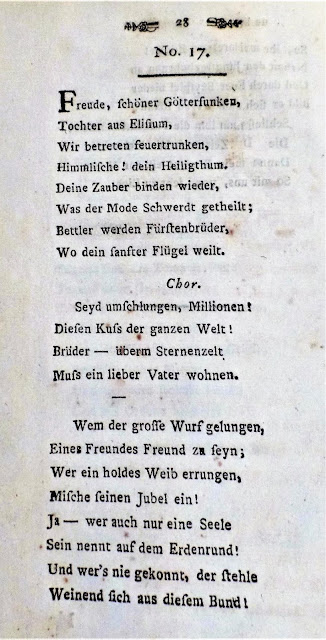 Lieder zum Gebrauch der vier vereinigten Logen in Hamburg (Songs for the Use of the Four United Lodges in Hamburg), published 1801. No. 17, beginning of Schiller’s “An die Freude.”

Personifying Freude in his poem’s first strophe, Schiller proclaims, “Joy, beauteous spark of the gods, / . . . . Your magic joins again, / what custom callously has divided.” As many readers will recall Schiller—and Beethoven in his setting of Schiller’s verse—ends the first stanza with the couplet “All men become brothers, / where your gentle wing lingers.” Yet this is the couplet’s contents only in the 1803 second version of the poem overseen by Schiller; in the first version, written in 1785 and published in 1786, the stanza ends “beggars become brothers of princes, / where you gentle wing lingers.” [1] If one reads the poem with a knowledge of Schiller’s other writings, what emerges is a program whereby the individual and community work together to attain Enlightenment, self-synthesis, or Bildung, what Schiller himself in his 1795 Ueber die ästhetische Erziehung des Menschen, in einer Reihe von Briefen (Letters on the Aesthetic Education of Man) addresses in the directive “Erkenne dich, weise zu sein,” to be wise know yourself. [2] That process was intrinsically communal, starting with the single self and requiring reciprocity with one’s community. Schiller addresses just this subject in the second strophe of “An die Freude,” when, after mentioning friendship and marriage, he moves next to the single self able to name (nennen) her or himself: “Ja — wer auch nur eine Seele / sein nennt auf dem Erdenrund!” (Yes — even he who calls only one soul / his on this round earth!). To name one’s self in the sense Schiller means here is to know one’s self, to have embarked on the path towards Bildung, the same concept he addresses in the passage from his Letters on the Aesthetic Education of Man cited above. As more than two centuries of critical commentary attest, the two lines that follow almost always are misunderstood: “And whoever has never known this [the joy named in the poem’s title] weeping, must steal away, from this alliance!” Arguably the most famous critic to erroneously take Schiller to task was Jean Paul Friedrich Richter (1763-1825). As Jean Paul declared in the 1813 second edition of his Vorschule der Aesthetik (School for Aesthetics), “I should depart silently, accompanying the unloved butt of the song, when the company chanted and cheered the heart-revolting sentiments, ‘Who ne’er could do it, weeping let him steal out of our band.’” [3] The misunderstanding is that Schiller casts out the single self; I disagree. What Schiller finds problematic is the person unwilling to embark on the challenge of Bildung.

Making a complete case for the argument that Schiller does not banish the single individual would require a great deal more space than what I wish to take up here. Briefly, however, in my project-in-progress which will address the social history of Schiller’s “An die Freude” and the fallout of that context in the finale of Beethoven’s Ninth, I am interested in trying to understand the popularity of Schiller’s poem among Freemasons yet also its appeal for society at large during the last quarter of the eighteenth century and into the nineteenth. As I hope to make clear in my current project, coming to terms with the popularity of poem and symphony sheds light on Beethoven’s attraction to the poem and the related fact that Schiller’s “An die Freude” occasioned a great number of musical settings in the years before Beethoven’s. Moreover, Schiller’s was not the only poem to address Joy as a philosophical concept or to have been given the name “An die Freude” or some similar title, many of which date to the early 1740s. Clearly, Beethoven didn’t set to music just any poem on any subject. Schiller’s “An die Freude” possessed deep cultural resonance. 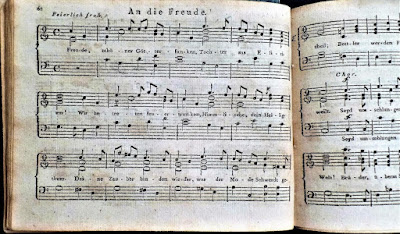 Searching through pertinent German publications at the Chancellor Robert R. Livingston Masonic Library between 1785 and 1830 that include Schiller’s “An die Freude” poem or poems bearing a similar title greatly advanced my research. All told, I consulted some forty volumes in which I found Schiller’s poem, a musical setting of his “An die Freude,” or a poem by another German poet addressing the same topic.

On my second day I made a poignant discovery, when, looking through the volume Lieder für Freymaurer (Songs for Freemasons), published in Hannover in 1809. Opening the book to page 142 I found nestled between that page and the next the remnants of a flower and the marks it had made on both sides of those pages. The flower makes good sense given that the poem into which it is inserted is called “Freundschaft,” “Friendship,” by August Gottlieb Meissner (1753-1807). The first two lines in translation are: “In the streams of life, there often enough flow the bitterest of tears.” In the lines that follow Meissner states that life’s tears can be assuaged by friendship, that is from within the social environment of self-cultivation Schiller treats in his “An die Freude.” 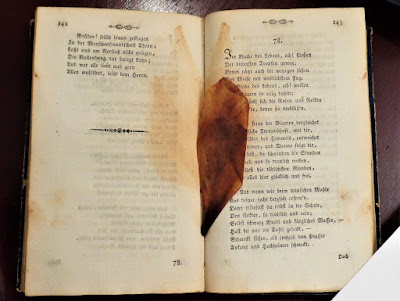 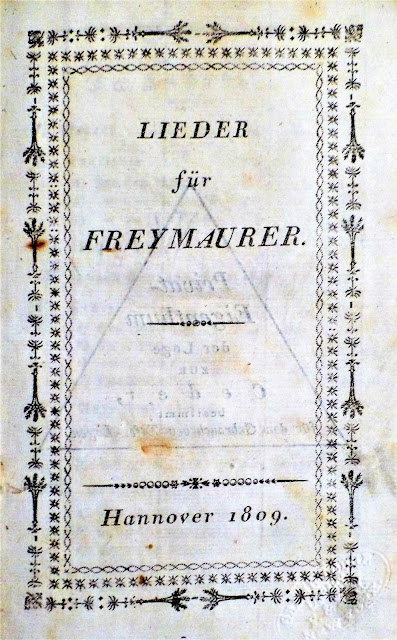 Most of the time turning the pages of eighteenth- and especially nineteenth-century printed sources is a finger staining not to mention eye and nose straining endeavor. Sometimes, however, the researcher comes across something that makes for a stand-still if not heart-stopping moment. For me the discovery of the flower was one of those moments, a tangible sign that someone before me had enjoyed this book and memorialized that experience. Was the flower a sign of friendship between the individual who had pressed the flower between the book’s pages and another? Did Meissner’s poem possess special significance for the person who left the flower? Before I allowed too many more questions to formulate I returned the volume to the librarian and made my way to the library’s exit on West Twenty-Third Street. In its own way, history had taken shape and reached out in the form of that preserved flower. Suddenly the more than 200 years that separated me from the 1809 Lieder für Freymaurer were no more. In that moment the past seemed very much alive.
***
[1] Writing the poem in 1785, Schiller published two versions of “An die Freude,” the first in 1786 in the second volume of his literary journal, Thalia, the second in the 1803 collected edition of his poems. The wording here, in English translation, is from the latter version, set by Beethoven. On the differences between the two versions see Friedrich Schiller, Schillers Werke: Nationalausgabe, ed, Julius Petersen et al. (Weimar: Hermann Böhlaus Nachfolger, 1943), 1: 169–72 and 2, part 1: 185–87, and my “‘Deine Zauber binden wieder’: Beethoven, Schiller, and the Joyous Reconciliation of Opposites,” Beethoven Forum (2002) 9/1, 1-53; here 4-5.
[2] Schillers Werke: Nationalausgabe, 20: 331.
[3] Jean Paul Richter, Vorschule der Aesthetit nebst einigen Vorlesungen in Leipzig über die Parteien der Zeit, 2nd ed., vol. 3 (Stuttgart and Tübingen: J. G. Cotta, 1813), 887-88.
[4] No composer attribution is provided in this publication; Reichardt’s authorship is established from Reichardt, Lieder geselliger Freude (Leipzig: G. Fleischer, 1796), No. 34, p. 76—music provided on foldout following the poem’s second strophe;  see http://idb.ub.uni-tuebingen.de/diglit/Mk90_R01_1/0163?sid=2433e061df1d4dd633eca390ab96bd98.
***