“What can the AMS do?”: The Scholarly Society and the Academic Jobs Crisis

Since 2008, the number of tenured and tenure-track faculty at higher-education institutions has declined by 35%. The Delphi Project reports that contingent (adjunct) instructors now teach 73% of courses (AAUP Annual Report on the Economic Status of the Profession, p. 3; Delphi Project). Working conditions for contingent faculty vary widely; most work on one-semester or one-year contracts with no promise of renewal. The pay and working conditions for part-time contingent laborers are especially poor: pay may be as low as $1800 per course, and more than 70% of institutions that employ part-time faculty do not contribute to their health insurance costs (AAUP op. cit., and AAUP Annual Report, Appendix III). Part-time contract work is the fastest-growing part of the academic work force (Coalition on the Academic Workforce). The few musicologists who do find tenure-track jobs in the academy see increasing workloads and declining research support at all but the most elite institutions.

National data and the data collected by the American Musicological Society (AMS) reveal that racial or ethnic minorities and women are more likely to be working as contingent laborers. According to the American Federation of Teachers, as of 2007, 10.4 percent of faculty positions were held by members of underrepresented racial and ethnic groups, but almost three-quarters of those were contingent positions (AFT, Promoting Racial and Ethnic Diversity in the Faculty: What Higher Education Unions Can Do, p. 13). Even as we have tried to promote appropriate representation in the profession, that representation is being eroded by the labor crisis (National Center for Education Statistics, “Race/Ethnicity of College Faculty”; AMS, Report of the Career Development/Contingent Labor Task Force, p. 1-2).

Scholars are increasingly seeking positions outside the academy. Our colleagues are working as radio hosts, outreach coordinators in museums, medical anthropologists, and librarians, among many other paths. Transitioning to other work from a graduate program that focuses on training students for academic professions may be personally traumatic, involving a complete overhaul of one’s career aspirations (Erin Bartram, “Why Everyone Loses When Someone Leaves Academe”). Retraining for a new career path may also mean earning a second degree or credential after the Ph.D., often at significant personal cost in time and money. Even as the need for new career paths for scholars has become urgent, our institutions have been slow to adjust: many Ph.D. programs resolutely prepare their graduate students for the kind of academic jobs that are likely no longer available to them.

This situation is a crisis not only for individual musicologists, but also for the discipline of musicology and for the American Musicological Society.

The association of musicology with academic employment is a comparatively recent development. Early in the twentieth century, musicology was not only the province of professors. As Tamara Levitz has pointed out, the AMS of the mid-1930s was allied with the pedagogy-focused Music Teachers’ National Association. From the 1930s through the 1950s, Levitz explains, music research on a broad range of topics was pursued by people situated in a variety of roles and professions (Levitz, “The Musicological Elite,” p. 25-27). Advertisements for musicological services, like the one on this page from 1951, reveal that independent scholarship existed in a variety of forms. 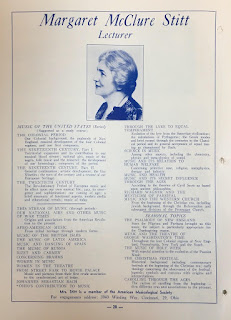 
In recent decades, the AMS has bound itself too closely to academic employment. AMS members have relied on travel subsidies from universities to attend our meetings, and the relatively stable pay of tenure-track jobs means that AMS members in those positions could afford to pay the dues and conference registration fees that fund the society’s activities. Since the 1960s, scholars unaffiliated with academic institutions have been the exception, not the rule. Now that academic musicology is under duress, so is the discipline. Membership in the AMS and other scholarly societies is declining. If fewer people are paid to carry out the work of the discipline, how will the discipline continue? If a shrinking professoriate means a shrinking society, the AMS will not be able to carry out its mission “to advance scholarship in the various fields of music through research, learning, and teaching” (https://www.amsmusicology.org).

But nothing in the AMS’s mission statement says that advancing scholarship is only or even principally a mission for people who work in academic institutions. If the AMS wants to continue its mission, it is urgent that the society broaden its vision of the discipline and of musicological work. Musicologists hold jobs in publishing, technology startups, the music distribution industry, and more. The most closely affiliated professions, like museums and librarianship, cannot alone employ all of the musicologists seeking related careers. Academic-adjacent professions are themselves under stress, and they typically require skills not taught in a musicology PhD. Nevertheless, musicologists are finding valuable ways to use the skills and sensibilities developed in their training.

As musicologists enter a variety of professions, are they “leaving the field,” as it is commonly said? (Alex Lancaster, “Beyond the alt-ac”)  Or are they “taking the field to new places”? If the society wants to survive, it must offer musicologists ways to remain connected to the society and its mission, no matter what lines of work they pursue. And the AMS must attend to and value the contributions of these musicologists.

What can the AMS do to support individual musicologists and the continued vitality of the discipline?

Our meetings should aim to include a broader variety of topics and perspectives, both in research talks and in other formats. AMS members value many kinds of professional development—including conversations about music metadata, teaching, archiving, copyright, public outreach, and mediation technologies—and the AMS should offer space for workshops on these topics. As Leah Branstetter, Digital Education Manager at the Rock & Roll Hall of Fame, has noted, “People in different kinds of industries throughout music, humanities, culture can offer perspectives and resources that make academic research stronger and more relevant (and vice versa)” (personal communication). This broader view of the discipline will mean accepting research presentations on more topics and making room at the conference for formal and informal professional development in new directions, and our understanding will be the better for it.

Our society should cultivate inclusiveness in all its processes: in making the program for the annual meeting, in deciding who gets awards or grants, and on the council and board. Inclusiveness means not waiting until a musicologist seems “senior” by academic standards to invite them to serve in a leadership role; and it means paying attention to the composition of panels and committees to purposefully include musicologists who work in a variety of jobs, especially those whose employment is precarious.

Individual members of the society at all career phases should invest in a broader vision by learning what lines of work musicologists are pursuing, and by supporting these kinds of work in the society and in the discipline. By welcoming all sorts of musicologists in service to the society, by building conference panels with them, and by writing letters of recommendation for them, we can make the society attractive and invite continuing participation. By choosing to converse with people at our conferences who have unfamiliar affiliations on their nametags, we broaden our own education. By advising our students that multiple kinds of musicological work exist, we may also support the survival of our discipline.

Musicologists who are working in contingent positions typically have fewer resources for research and professional development. The AMS must find ways to support contingent laborers. Our nonprofit status means that we cannot act as a labor union ("How Not to Confront the Jobs"); but we can speak up for decent working conditions as individuals and as a society (see “The AMS and Contingent Faculty”). The recent change in the terms of the society’s Janet Levy Fund allows contingent workers to apply for the grant: an important first step. It will be a challenge to find further funds to offer, as the existing financial resources of the AMS are largely restricted to their assigned uses. But such support is essential if we are to keep precariously employed people in the disciplinary conversation. Contingently employed musicologists may have teaching loads of five or more courses per semester. Some but not all have the time and resources to engage in research; regardless, all are still part of the discipline. Ensuring that contingent faculty help determine the content of AMS meetings will ensure that the AMS is working for them and increase the likelihood of keeping them in the society.

None of the actions proposed here will make everything okay for individuals or for the discipline. But adapting to structural changes will be an essential step if we want musicologists and musicology to thrive. All members of the AMS—not only its early-career members—need to understand these changes so that we can adapt to these new conditions. The American Historical Association (AHA) has compiled an informative database that shows that one-fifth of historians are already working outside the academy (Where Historians Work) and it continues to publicize information about career paths. Through its Career Diversity Initiative the AHA has also worked to demonstrate the value of doctoral education for many kinds of employment. The AMS has begun gathering data about outcomes for PhDs in musicology over the past ten years and will use this information to make choices that support our colleagues and the discipline.

The AMS has about 2,400 members, many of whom feel a strong sense of belonging. But many people will remain in the society only if they have reason to do so—if the society welcomes them and meets their professional and personal needs. To care for our colleagues and for the discipline will require energy, flexibility, and commitment. I encourage every member of the AMS to work toward an inclusive vision of musicology.
***

Danielle Fosler-Lussier works part time as Professor of Music at Ohio State University. In addition to the editors of Musicology Now, she thanks Reba Wissner, Leah Branstetter, Suzanne Cusick, Alison Furlong, Kirsten Carithers, Steve Swayne, Kelly Hiser, and “Musicology Twitter” for their editorial wisdom and their advice about these concerns.